As a mortgage broker dealing with self-employed people and small business owners I get asked a lot to finance tax debt.

In most cases the people have already been talking to their banks and got the big NO.

But sometimes we get the chance to arrange the finance before people have talked to their bank. 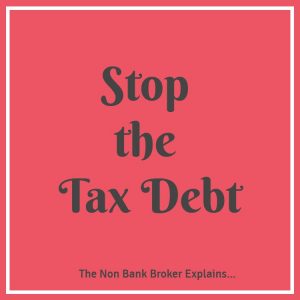 Grant is a small West Auckland business owner that we have known for a few years.

We had arranged a mortgage for him with ASB Bank and later some finance for a boat, so when he got into strife with the IRD he got on the phone and called me.

When we discussed the situation with Grant he acknowledged that he owed the tax, and explained the problems his business had faced 2-years ago that had led to a cashflow issue; hence led to the tax not being paid. Business was back on track and seemed to be doing okay, but Grant was struggling to see how he could pay the IRD arrears and while he was trying it seemed that the interest and penalties being charged meant the tax debt was increasing faster than he could pay it.

Grant asked if he could get a top up to pay the tax debt.

I know that banks do not like to finance tax debt, but I could also see that Grant had equity in his home and business was trading okay.

Given this I knew that we could get the finance required from a finance company as a second mortgage but it would be more expensive than a top-up to the mortgage with his bank.

But how could I ask the bank to provide a top-up to cover the tax arrears?

The key thing when asking a bank to finance tax debt is to have a good story and the full story with supporting information. After discussing with Grant and speaking to his accountant I could identify the issue within the business that lead to the cashflow issues, and therefore to the reason that Grant could not meet his tax obligations for a period. It was also obvious that Grant had fixed the problem with the business and so could meet his ongoing tax obligations.

So I put together a finance application and also helped Grant draft a proposal for the IRD.

Earlier in the month I received the approval from the bank for $60,000 to provide a loan to cover the tax debt including the interest and penalties.

He now has a loan at a very reasonable interest rate and one that he can pay off over a period of time that suits his cashflow.

If you have tax arrears and want a way to finance tax debt then give me a call too.